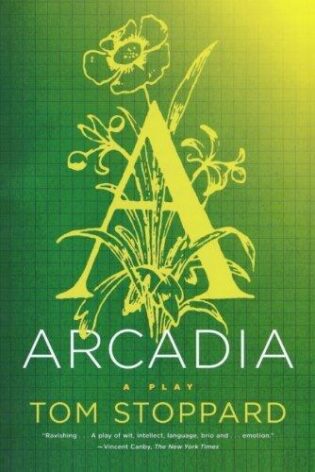 In a large country house in Derbyshire in April 1809 sits Lady Thomasina Coverly, aged thirteen, and her tutor, Septimus Hodge. Through the window may be seen some of the “five hundred acres inclusive of lake” where Capability Brown’s idealized landscape is about to give way to the Gothic style: “everything but vampires,” as the garden historian Hannah Jarvis remarks to Bernard Nightingale when they stand in the same room 180 years later. Bernard has arrived to uncover the scandal which is said to have taken place when Lord Byron stayed at Sidley Park. Tom Stoppard’s masterful play takes us back and forth between the centuries and explores the nature of truth and time, the difference between the Classical and the Romantic temperament, and the disruptive influence of sex on our orbits in life―“the attraction,” as Hannah says, “which Newton left out.”

I recently read Arcadia with a play-reading group which meets over Zoom. It was my first encounter with the play, and I really enjoyed it. I’m having a hard time describing it, though, because Stoppard has crammed so much into it. The play explores a number of themes, among them the relationship of past and present, the Enlightenment vs. Romanticism, the challenges and pitfalls of historical research, and our tendency to believe what we want to be true instead of actual truth. Stoppard peoples the play with a number of interesting and in some cases eccentric characters, then weaves the themes together with mathematics and physics, landscape gardening, early 19th-century poets, a possible duel, and not a little off-stage sex. He tops off the entire intricate construction with with sparkling, witty, sometimes laugh-out-loud dialogue.

Arcadia is a play that probably should be seen rather than read. It’s harder when reading to fully appreciate the way in which its two time periods (the 1820s and the 2000s), initially separated into lengthy scenes but joined by a common setting and family, gradually draw closer as the scenes become shorter. Toward the end of the play, the timelines overlap altogether, with several of the main characters inhabiting the stage simultaneously whilst still distinctly within their own timelines. The parallels between some of the past and present characters and situations would be much more apparent if one could see them visually, particularly once the contemporary characters begin dressing up in pseudo-Regency attire for a costume party.

In the absence of a production to attend, however, I welcomed the opportunity to read it aloud with other theater-lovers. Arcadia was a delight, and a highlight of my reading month.

In case you’re wondering; I read Thomasina Coverly, the young mathematical genius in the early-19th-century timeline. When one of our group couldn’t return for the reading of Act 2, I took over the role of Chloe as well — like Thomasina, a daughter of the house, but in the modern timeline and somewhat different in personality. It was fun to switch between the two.

9 Responses to “Arcadia, a play by Tom Stoppard”