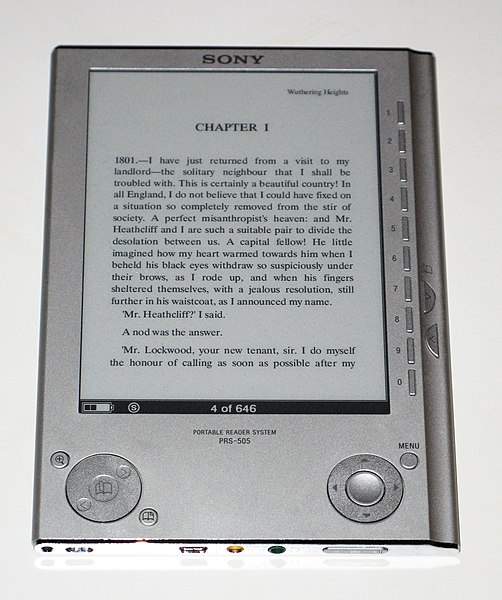 My new-to-me (barely used) e-Reader arrived a few weeks ago, and I’ve been having a lot of fun playing with it in my very infrequent spare moments. I am now officially an e-book convert! Yes, I still have some of the same reservations I’ve mentioned before regarding format/device longevity and the pricing of copyrighted books. I think both the technology and the marketing model could improve, and hopefully will. But the benefits now outweigh the drawbacks, and I’m glad I took the plunge.

As I mentioned in a previous post, I chose the Sony PRS-505 even though it is no longer available through Sony, because it combined the screen size and quality I wanted with the ability to read ePUB files. ePUB may eventually shake out as the industry standard; the jury is still out on that, but it has increased in popularity over the last year or two. (Note to those unwilling to spend upwards of $200 on a lightly-used device sans warranty: Borders will be selling both the Kobo and Aluratek’s Libre e-readers by mid-June, the former for $149 and the latter for an astounding $119. Both devices read ePUB files.) [ETA 4/17/2017: Borders has gone out of business. Barnes & Noble’s NOOK and the Kobo ereaders are now the only mainstream ePUB readers, but you can get the Adobe Digital Editions app for most smartphones and tablets, which will allow you to read ebooks in the ePUB format.]

Taking the advice of my PRS-505-owning dad (as well as that of several tech reviewers), I downloaded the free Calibre book management software to my computer. Calibre is a powerful product. In addition to cataloging your e-books by title and author, it allows you to “tag” them for additional organization, and even to identify the book within a series. Even more important, Calibre can convert non-DRM files from one format to another. For instance, if you have a book in Microsoft .lit format, Calibre can convert it to ePUB format. It’s not perfect; occasionally a file will not convert. But it’s pretty good.

If you purchase e-books with DRM, you will need to use either Adobe Digital Editions or your reader’s own library software to manage and load the books. I gather that using two different programs to upload e-books to your e-reader device can cause problems. Since I haven’t yet purchased any “new” e-books, I haven’t had to deal with this yet. So far, there are enough legally free books out there, both old favorites and as-yet-unread, to keep me busy for a while.

A growing number of U.S. public-domain titles are available in ePub format* (without DRM), so that’s where I decided to start. I started at Manybooks.net, one of the easiest sites to use. Between Manybooks and Feedbooks.com, I downloaded about 80 public-domain works, ranging from literary classics by Austen, Thoreau, Twain and others to childhood favorites like the “Anne of Green Gables” books**, The Wizard of Oz, and Pollyanna. If a title is well-known and was published in the United States before 1923, you can find it in ePUB somewhere on the Internet. Most of the Sherlock Holmes canon, some of G. K. Chesterton’s Father Brown mysteries, two Agatha Christie titles, and one or two Dorothy Sayers rounded out my initial public-domain collection. (Note that Feedbooks is not as easy to navigate as Manybooks. You can also find a lot of both well-known and obscure titles at Project Gutenberg, though many are not yet in ePUB format. If it’s in .html format, Calibre can convert it. Project Gutenberg also has links to free audio recordings of some of its titles.)

Then I went looking for “new” free e-books. There are a number of sites offering legal downloads of free or inexpensive e-books. Caveat emptor: many of the titles are probably self-published, so the quality of the writing and editing will vary widely. (There’s a fair amount of erotica/porn on some of the sites, as well.) [ETA 4/17/17: The quantity of self-published or “indie” books continues to soar. The quality still varies widely. Some are nearly indistinguishable from traditionally published books, while others are, to put it frankly, gosh-awful.]

I passed on the books of questionable quality or content and headed for the science-fiction-and-fantasy section, otherwise known as the Baen Free Library (about which I wrote in a previous post.) There I downloaded several books by Mercedes Lackey, one of my favorite fantasy authors, as well as works by several authors I have been meaning to try: Elizabeth Moon, Holly Lisle, and Lois McMaster Bujold, among others.

Uploading the books to my Sony Reader was simple, using Calibre. I simply connected and charged the Reader, selected the titles I wanted to upload, and told Calibre to send them to the device. Once the Reader was loaded and charged, I was ready to try it out.

The Sony Reader takes a little while to “come up” when you first turn it on. Plan to wait for about a minute while it organizes the books you have loaded. Once that process is done, the Reader is easy to navigate using the menu and up-down-left-right button, numbered buttons at the side, and the dual page-turn buttons (a rocker switch on the left bottom, operable with either hand, and a pair of page-forward and page-back buttons on the right-hand edge of the device, operable by your right thumb.)

I decided to read Elizabeth Moon’s Sheepfarmer’s Daughter, the first in the “Deeds of Paksenarrion” trilogy, downloaded from the Baen Free Library. The reading experience was very comfortable. Although the e-ink screen on the PRS-505 isn’t as white as a piece of paper, and the text isn’t as black as in a printed book, the text is still very clear and crisp and the contrast was pretty good; I had no trouble reading as long as I had adequate light. As I became absorbed in the story, I often forgot I was reading on an e-Reader; it took a little while for me to stop reaching up to turn a physical page. After a while, thumbing the page turn button became automatic.

The Sony Reader, like most e-readers, allows you to scale the font. I found that the default font size was perfectly comfortable for me at this point, and I much prefer to have a fair bit of text on each “page.” Since I’m already having trouble with really tiny print (think ingredients lists on food labels), I can see that the ability to enlarge the font will be invaluable in the future.

The page breaks do not correspond to the pages in any given print book, but in Sheepfarmer’s Daughter, a tiny numeral indicated the page break in the paperback copy. This numeral occasionally obscured the last letter or two of a word, but I quickly got used to it and barely noticed it. I assume the print-book page breaks are noted in the e-book file I downloaded. I haven’t noticed them in the file of Louisa May Alcott’s Eight Cousins which I downloaded from Manybooks.

Loading the book takes a little while, but page turns take very little time. I went to “Settings” and turned on the sleep mode. This allows the Reader to hibernate when I flick the power switch. When I flick the switch again, the Reader immediately returns to the page I was on. If you turn the device off completely or plug it in to recharge, it will still remember your book and page, but when the Reader is turned back on, you get the minute-long warm-up/organization delay, and it displays the start menu. Since one of the choices is to continue with the book you were reading, this isn’t much of a problem, but the delay can be annoying. Sleep mode does drain the battery, but not very quickly, so it’s a good choice if you pick up and put down a book several times a day.

It’s recommended that you keep the battery topped up to extend battery life. My PRS-505 (bought used) came with both the USB-to-mini-USB cable to connect to the computer and a wall charging cord.  [ETA 4/17/17: Sony no longer makes and sells ereaders at all.]

All in all, I’m really happy with my Sony Reader, and can’t wait to take it on vacation. A whole library in one slim volume — heaven! (And maybe I’ll finally get around to reading some of the classics I haven’t yet read!)

*A note on copyright issues: In the United States, everything published before 1923 is in the public domain. Period. Books by U.S. authors published in the U.S. between 1923 and 1963 may be in public domain if the copyright was not renewed. If copyright was renewed, the books enter public domain 95 years after publication, so books published in 1925 will enter the public domain in 2020. Books published between 1964 and 1977 will also enter public domain 95 years after publication, but many of us will no longer be in a position to appreciate that. Books first published outside the U.S. have some special rules/cases. Cornell University has a summary of U.S. public-domain rules in PDF format. Copyright laws in other countries vary. You are subject to the copyright laws in the country in which you currently reside. If you live outside the U.S., titles available at the sites I mentioned above may or may not be legal for you to download; check your own country’s laws on public domain.

I would be remiss if I did not point out that many books under copyright in the U.S. are nonetheless available for free on the Internet. This includes both books which are in the public domain in other countries but not yet in the U.S., and pirated copies of newer publications which are currently under U.S. copyright. Compliance with applicable copyright law is up to the individual reader, and you should be aware that you can be prosecuted for breaking copyright laws (owning pirated books or sharing copyrighted books without permission.)

**Oddly, neither Anne of Windy Poplars nor Anne of Ingleside is in public domain in the U.S. I say “oddly,” since they are numbers 4 and 6 of an 8-book series; logically, you would think it would be books 7 and 8 which were not in public domain. If you search, you may find the titles anyway, as they are in public domain in Australia. Just because they’re available doesn’t mean they’re legal; as I mentioned above, the copyright laws of your country of residence apply.