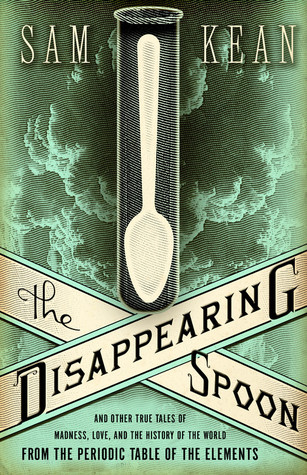 The Periodic Table is one of man’s crowning scientific achievements. But it’s also a treasure trove of stories of passion, adventure, betrayal, and obsession. The infectious tales and astounding details in The Disappearing Spoon follow carbon, neon, silicon, and gold as they play out their parts in human history, finance, mythology, war, the arts, poison, and the lives of the (frequently) mad scientists who discovered them.

We learn that Marie Curie used to provoke jealousy in colleagues’ wives when she’d invite them into closets to see her glow-in-the-dark experiments. And that Lewis and Clark swallowed mercury capsules across the country and their campsites are still detectable by the poison in the ground. Why did Gandhi hate iodine? Why did the Japanese kill Godzilla with missiles made of cadmium? And why did tellurium lead to the most bizarre gold rush in history?

From the Big Bang to the end of time, it’s all in  The Disappearing Spoon.

I’ve been wanting to read this for a while, but my child — henceforth known on this blog as Robin — got there first!  Their review was originally published on Goodreads.

Like Bill Bryson’s book At Home, The Disappearing Spoon flits from subject to subject within its general idea. It’s a lot to take in at once; I will have to read this book several more times before I fully understand it all. That said, this is a very interesting book. Kean’s approach to science and the history of science makes the topic lively and relatable. Science for Kean is not some abstract ideal; it’s driven by human rivalry and teamwork, the desire for fame and glory, and simple curiosity. It’s full of mistakes and corrections and conflicting opinions. With Kean, the Periodic Table of Elements comes down off your high-school teacher’s wall and reveals itself to be a collection of separate-yet-connected stories.

REVIEW: A History of the World in 6 Glas
TOP TEN BEACH READS
“Below Stairs” by Margaret P
Fact and fiction: Never the twain shall
The Sound of Paper, by Julia Cameron (Re

3 Responses to “The Disappearing Spoon, by Sam Kean (guest review by Robin)”