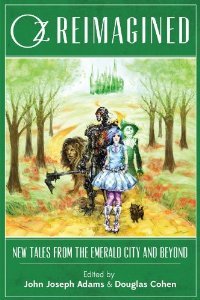 Categories: Fantasy; short story anthology
Publisher: 47North, Feb 2013
Book Source:  Review copy recieved through NetGalley
This is definitely not the Oz of my – or your – childhood.  Editors Adams and Cohen asked fantasy authors to reimagine Oz, rather than set stories in L. Frank Baum’s world.  And reimagine it they have.  From Seanan McGuire’s dystopian “Emeralds to Emeralds, Dust to Dust” to Ken Liu’s deft recasting of the original story in revolution-era China in “The Veiled Shanghai” to Kat Howard’s haunting “A Tornado of Dorothys”, each story reveals a unique and often thought-provoking twist on the Oz tales of my childhood.
More than a few stories offer social commentary: Rachel Swirsky’s “Beyond the Naked Eye,” recasts the story as a game show, while in Theodora Goss’s “Lost Girls of Oz,” Oz has become a refuge – and perhaps more – for abused and neglected girls. “City So Bright” by Dale Bailey explores worker oppression, and Seanan McGuire’s entry looks at immigration, poverty, and slums.  Some are quirky but interesting: in Orson Scott Card’s “Off to See the Emperor”, Baum’s son and a girl name Dotty search for the Emperor of the Air, while Jane Yolen explores what Uncle Henry, Aunt Em, and the hands might have experienced after Dorothy was “Blown Away” – and what happens after she returns from seven years in the circus.  Some of the stories are disturbing: Robin Wasserman’s “One Flew Over the Rainbow” and Jeffrey Ford’s “A Meeting in Oz” both made me very uncomfortable, albeit for different reasons.   On the other hand, Simon R. Green’s lovely “Dorothy Dreams” made me smile and weep at the same time, and Jonathan Maberry’s magical “The Cobbler of Oz”, a fairy tale/fable in the best tradition of the original Oz stories, is almost worth the price of admission all by itself.  It tells the story of a cobbler, a Winged Monkey child with stunted wings, a dragon – and the silver slippers.
Yes, I did say silver slippers.  The authors were asked to use the original books by L. Frank Baum, not the movie starring Judy Garland.  It’s clear that most of them did so, though few appear as familiar with the stories that came after The Wonderful Wizard of Oz as do Tad Williams, Seanan McGuire, and Theodora Goss.  It’s also clear that, however far their stories may diverge from Baum’s originals, most of these authors write from a deep respect and love for the classic Oz tales.   I also want to give a shout out to Gregory Maguire (author of the Oz-inspired series that includes Wicked) for a passionate and moving tribute to Oz in his terrific foreword.
One final warning: these stories are for those who love Oz, but they are not for purists nor, for the most part, for children.  If you’re willing to see Oz through different eyes, willing to risk discomfort but also delight, then give these stories a try.
Rating: 4 stars for the collection, with reservations (some stories rate lower; a few rate higher.)