The big news of the week is that Tor/Forge will drop DRM from its ebooks by early July.  Tor UK plans to do to the same. (Tor/Forge is a subsidiary of MacMillan, which is still involved in the DOJ price-fixing lawsuit.)

Eliminating DRM has been proposed as one way that publishers could break or at least stave off the stranglehold Amazon holds or is attempting to establish on the ebook business.  The advantage is that DRM-free books aren’t as tied to a specific reader device, meaning Kindle customers could purchase books elsewhere to use on their Kindle (assuming the books are available in mobi format.)  This also frees publishers to sell books more easily from their own websites. On the other hand, any change in DRM policy won’t affect books bought prior to the change, meaning customers with a large investment in books for one platform (Kindle, Nook, or ADE ePub) still wouldn’t be able migrate their books to another device without breaking the law by removing the DRM.  So Amazon would still have a large customer base: its existing Kindle customers.

The advantage of DRM-free books for purchasers is obvious: you own the book; it isn’t licensed to you.  You can use it on any device capable of reading it.  With tools like Calibre, you can even convert it for use on e-readers of other formats.  Thus, DRM-free books are platform-neutral. You never have to worry about the publisher or retailer going out of business or yanking the book from you for unknown reasons, as has occasionally happened to purchasers of Kindle books. Forward-compatibility will probably not be a problem either, again because conversion tools will no doubt be available.

The problem with that argument is that it doesn’t hold water.  First, removing DRM is ridiculously easy for anyone with a reasonable amount of technical expertise, and there are even tools to make it easy for someone with little expertise.  (No, I haven’t tried this, but do a Google search on “removing DRM” and you’ll see what I mean.)  Thus, it’s not hard for pirates to circumvent DRM.  On the other hand, DRM prevents people from easily migrating their book across platforms* or lending it to a friend or family member (which incidentally is one way authors get new readers — and new customers.)  In other words, DRM is inconveniencing customers but probably not putting much of dent in piracy.

Second, the industry seems to equate the number of pirated books downloaded with an equivalent number of lost sales. It assumes that every individual who downloads a pirated book would actually have bought the book if no pirated copy were available.  It’s probably safe to say that at least some of those readers would not have purchased the book, at least not new.  They would have borrowed it from the library or a friend, found it in a used bookstore, or left it unread — none of which would have put any money in the publisher’s pocket.  (Well, to be fair, the library had to buy at least one copy, but many people read each library copy, so the presumed income from our given individual is  negligible.)

Many pirated ebooks are not currently and have not been available for sale as ebooks, though they remain in print. Others are out of print but not in the public domain.  It’s hard to see how the publisher is losing “real” sales on these titles, since the reader can’t purchase them as ebooks, or, in the case of the out-of-print books, in any format that benefits the publisher and author at all.

There are also people who want both the pbook and the ebook — the former for their bookshelves, and because they genuinely love the feel of print books, and the latter for convenience when away from home.  Very few people are willing to pay twice for the same content.  Instead, they’ll buy the pbook and pirate the ebook, or buy the ebook and find a very cheap used copy of the pbook.  Again, no real sales lost for the publisher and author.** 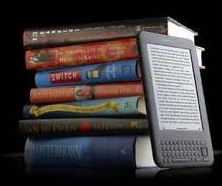 Finally, there’s good evidence that publishers and authors can sell DRM-free books without losing money or sales.  Baen Books has been selling its books DRM-free for years — certainly long enough to determine whether it’s a viable alternative.  O’Reilly offers its books without DRM, as do Samhain, Ellora’s Cave, Angry Robot, and Harlequin’s Carina Press.***  And of course, the Harry Potter ebooks have been issued without DRM, though they do have a digital watermark to track piracy.

It remains to be seen whether other publishers will try the no-DRM experiment, whether it will become the dominant model (as it did in the music industry, eventually), and whether it will be successful in maintaining and even increasing competition among ebooksellers.  What is clear is that consumers who buy DRM will benefit by owning rather than merely having a license to use the content they purchase.  Now might be a good time to check out Tor/Forge’s offerings.  The DRM will come off in early July.

* Yes, I know there are apps for some of the readers/formats on various tablets and mobile devices.  But it’s not possible to read a Kindle book on an ePub e-reader, for instance.  Or even to read a Nook book on a Sony reader; though they’re both in ePub format, B&N’s DRM is proprietary.


** I don’t want to minimize the fact that in some cases, authors and publishers do lose money from piracy. Intellectual property rights are certainly important, and I’m sure it is galling for an author to see their book pirated. But I don’t think the losses are nearly as high as the industry seems to think, for the reasons I’ve given above. And if what matters is lost revenue, why has the industry never targeted the used-book market, which has (by their logic) been costing them sales for at least a century?


*** Thanks to the PublishersLunch blog for the list of DRM-free publishers; their blog post also discusses some of the implications.  Pageviews, the New York Daily News blog, also has a good article on the subject.