Today is the 448th anniversary of Shakespeare’s birth.  Even if you’ve never read his plays or sonnets, you owe Shakespeare quite a lot.  According to scholars, he may have contributed as many as 1700 new words to the English language — words like abstemious, lackluster, and zany.  He invented phrases we use so commonly today that some people, attending their first Shakespeare play, dismiss him for using too many cliches.  If you use the terms tongue-tied, dead as a doornail, cold comfort, vanished into thin air, fair play, or the truth will out, you’ve quoted Shakespeare, probably without realizing it.  Of course, Shakespeare is often quoted deliberately (or misquoted, not always deliberately.)  He had a particular genius for capturing ideas, feelings, thoughts in a short phrase or a pithy sentence:  “the be-all and the end-all”, “green-eyed jealousy”, “Cry ‘havoc’, and let slip the dogs of war!”

Shakespeare gave us plays of incomparable beauty, tragedy, and comedy.  His characters are us, for good or ill: contradictory, fascinating, and all too human.

If you’re interested in reading more about the ways in which Shakespeare and his works have impacted our language, our history, and our culture, read Stephen Marche’s How Shakespeare Changed Everything, a delightful collection of essays masquerading as chapters.  From race (Othello) to teenagers (Romeo and Juliet and, surprisingly, Hamlet) to sex (almost everything Shakespeare wrote) to the links between Julius Caesar and Lincoln’s assassination, Marche explores Shakespeare’s plays as through a kaleidescope: a new pattern emerges with each turn of the lens.

For last year’s anniversary, Robert McCrum wrote an intriguing piece for The Guardian on why Shakespeare’s plays are so compelling.  Among his reasons are that Shakespeare’s language — the ways in which he plays with words — engage our brains in unusual ways.

Today is also the birthday of  Ngaio March (1895-1982), the New Zealand-born British mystery author.  If you’re interested, you can read my reviews of Marsh’s Inspector Alleyn mysteries and the BBC television adaptations. 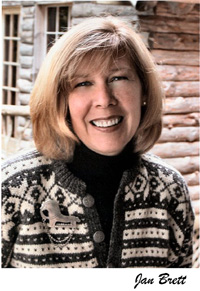 A Celebration of Jan Brett