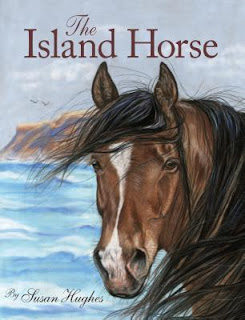 Category: Children’s fiction  (grades 2-5)
Publication date: March 1, 2012
Book source: Publisher review copy through NetGalley
The Island Horse evokes the works of Marguerite Henry, particularly Misty of Chincoteague, although the reading level is simpler and aimed at younger children.  The book is set in the 1800s on Canada’s Sable Island, a long, narrow, crescent-shaped sandbar island in the North Atlantic about 300 km east-southeast of Halifax.  Surrounded by shoals, the island has been the site of more than 350 shipwrecks over the centuries. Canada has maintained a rescue station on the island since 1801; only a few people live on the island at any given time, but in the nineteenth century, several families made their homes there.
When Ellie’s father accepts a position on Sable Island after the death of his wife, Ellie is uprooted from the Nova Scotian home she loves.  Forced to leave behind everything she has ever known, Ellie has a hard time adjusting to life on the treeless, windswept island.  Her unhappiness spills over into prickliness toward Sarah, the only other girl her age on the island.  Soon, however, several encounters with one of the wild stallions on the island give the horse-loving Ellie something to think about besides her own unhappiness.  When Ellie learns that a roundup will be held to capture and sell some of the wild horses to the mainland, she knows she must save “her” horse and his little herd.  But how?  With the support of her father and the still-friendly Sarah, Ellie is determined to try.
Ellie’s feelings about her new life are sensitively portrayed, though young readers may at first be confused by references to Ellie being “underwater” – a metaphor for feeling overwhelmed and powerless.  The island is also clearly and vividly described.  A storm, a shipwreck, and the rescue of the crew could perhaps have been given a little more emphasis, and Ellie’s developing relationship with the horse she names “Orchid” seems a little tenuous given the trust the horse eventually places in her, but these are minor quibbles.
Lovely pencil or charcoal drawings of the island and (mostly) of horses lend visual interest.  The simplicity of the writing makes this an ideal book for young readers transitioning into chapter books.  Ellie is a sympathetic character, and the romance and adventure of this isolated island are appealing.  The Island Horse would make a good addition to children’s library collections, as well as a thoughtful gift for horse-loving youngsters in the early grades.