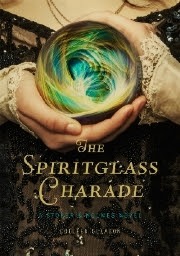 After the Affair of the Clockwork Scarab, Evaline Stoker and Mina Holmes are eager to help Princess Alix with a new case. Seventeen-year-old Willa Aston is obsessed with spiritual mediums, convinced she is speaking with her mother from beyond the grave. What seems like a case of spiritualist fraud quickly devolves into something far more menacing: someone is trying to make Willa “appear lunatic,” using an innocent-looking spiritglass to control her. The list of clues piles up: an unexpected murder, a gang of pickpockets, and the return of vampires to London. But are these events connected? As Uncle Sherlock would say, “there are no coincidences.” It will take all of Mina’s wit and Evaline’s muscle to keep London’s sinister underground at bay.

The Stoker and Holmes series has a lot of things going for it, and the second installment is better than the first. Gleason has created an entertaining steampunk world, complete with both “handmaker” and “cognoggin” fashions (the two cultural factions, as it were), semi-Victorian social mores, a London replete with multiple levels of walkways, various mechanized gizmos and gadgets, and a total ban on electricity.  The plot, as in The Clockwork Scarab, contains almost everything you can think of: fake mediums, attempted murder, a kidnapped boy, an inheritance, a love triangle (not involving the main characters), a young woman who may be going mad, and vampires. There’s also a subplot involving a time-traveler from our world (complete with iPhone), Queen Victoria, and Dr. Watson. Mycroft and Sherlock Holmes and Bram Stoker rarely show up in person, but given their relationships to the main characters, they are all mentioned here and there throughout the book. And then there’s Miss Irene Adler, the girls’ employer and mentor. . . who doesn’t seem to be feeling at all well for some reason. It all makes for an amusing and suspenseful romp, as complex and intriguing as a Victorian clockwork.

I wasn’t entirely happy with Evaline and Mina in The Clockwork Scarab; they were rather scornfully dismissive of each other and each was determined to go about things her own way, ignoring the fact that they’d been assigned the case as partners. They were also both too susceptible to handsome men; the way each young lady went a bit fluttery around certain men began to feel like a bad Gothic novel (although, to be fair, that sort of thing abounds in the Victorian novels of the day.) Thankfully, both of them are better developed in this book, and both face challenges that force them to grow. . . and gain more respect for one another’s strengths. Mina’s logical, rational scientific worldview is challenged by the very existence of vampires and the possibility of supernatural forces; Evaline has to confront her fears head-on, as well as her belief that vampires are nothing but inhuman monsters. By the end of the book they are, if not truly partners, at least becoming friends.

As for the other characters, Miss Adler remains mysterious, though we learn a bit more about her. I’m still somewhat suspicious of her, but willing to give her the benefit of the doubt. Dylan, the time traveler, becomes more active in this book; he’s not directly involved in the mystery itself but he plays a crucial part more than once. The handsome Scotland Yard inspector and Pix, the Cockney sneak thief both appear at intervals, sometimes helpful, sometimes obstructive. While Mina and Evaline are still attracted, they’re also able to keep their heads this time around, which is more in keeping with the determination and strength of will the young women display in the rest of their lives.

All in all, I was happier with The Spiritglass Charade, and I’m definitely looking forward to the next book. There are still some lingering questions from the first book, after all — and a new puzzle uncovered at the end of this one. I can’t wait to see where Ms. Gleason takes us next!

About the author:  Award-winning NEW YORK TIMES and USA Today bestselling author Colleen Gleason has written more than twenty books for major publishers such as Penguin Group, Harlequin Enterprises, Chronicle Books, and HarperCollins (as Joss Ware). Her books have been translated into seven different languages.

Colleen lives in the Midwest United States where she is fortunate enough to be working on her next book. She loves to hear from readers via her website, Facebook, or GoodReads.  (biography source: Goodreads) 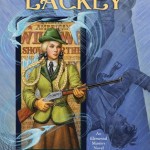 From a High Tower, by Mercedes

7 Responses to “The Spiritglass Charade, by Colleen Gleason (early review)”