Yesterday (Oct. 14) was Winnie the Pooh’s birthday!  Well — sort of.  October 14, 2013 marked the 87th anniversary of the first printing of Winnie-the-Pooh.  The actual stuffed toy was given to the real Christopher Robin for his first birthday on August 21, 1921, which makes Pooh a venerable 92 years old.

I don’t know about you, but I grew up on those books.  My mother passed her childhood copies to me, and I read them over and over.  The classic illustrations by Ernest Shepard became part of my imagination, and still bring back my childhood.

I also loved the Disney movies, which I saw in movie theaters and later on television.  I even had the “Blustery Day” record album as well as a vinyl recording of Maurice Evans reading the first chapter of Winnie-the-Pooh.  (I still have them; we copied them to cassette, then CD, and finally digital WAV files so our daughter Robin could listen to them, too.)  I wanted a stuffed Pooh very badly as a child, but was given a Smoky the Bear at the age of three, instead.*

My family is well aware of my love for Pooh.  We gave Robin a Pooh bear when she was 18 months old. I dressed her as Pooh for Halloween, several years running.  (Alas, my photos from those years haven’t been digitized yet.)  And a year or two ago, Mr. Bookwyrm gave me Pooh slippers like the ones our Robin had as a child.

When Robin was about 7, we took her to England for several weeks.  We visited Ashdown Forest, the real Hundred-Acre Wood, and Hartfield, the village near the Milne home.  The home is in private hands, but Poohsticks Bridge had recently been rebuilt, so of course, we had to play Poohsticks!  We also visited Pooh Corner in Hartfield, a charming Winnie-the-Pooh themed store; the building used to be the sweetshop where the real-life Christopher Robin bought a pennyworth of sweets each week. (No, our Robin isn’t named after Christopher Robin.  It’s not her real name, just a blog name to protect her privacy.)

Among my greatest treasures are the Pooh figurines our daughter Robin has made for me over the last several years — one or two a year, for Christmas and birthdays.  She’s done an amazing job of capturing the essence of Shepard’s drawings, as you can see.

So happy birthday (or anniversary), Winnie the Pooh!  I think it’s safe to say, our childhoods would have been very different without you.

* I can’t complain; Bear (as I unimaginatively named him) became my constant companion, accompanying me on visits to relatives, sleepovers, to camp, and eventually to college.  Decades later, I still have him, though he’s too worn and fragile now to display. 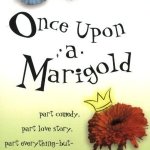 Once Upon a Marigold, by Jean Ferris