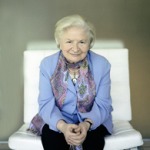 P.D. James, author of the Inspector Dalgliesh and Cordelia Grey mystery series as well as The Children of Men and Death Comes to Pemberley, died Thursday at the age of 94. Some of her Dalgliesh novels were adapted for television by ITV and later the BBC, and broadcast in the U.S. as part of the Mystery collection on PBS. Her mysteries were well written, absorbing, and intellectually satisfying; A.S. Byatt says of her work that it “was on the borderline between crime fiction and literary fiction.” Rest in peace, Ms. James, and thank you for many hours of fascinating reading. [Obituaries: BBC (quoted); The Guardian; Washington Post]