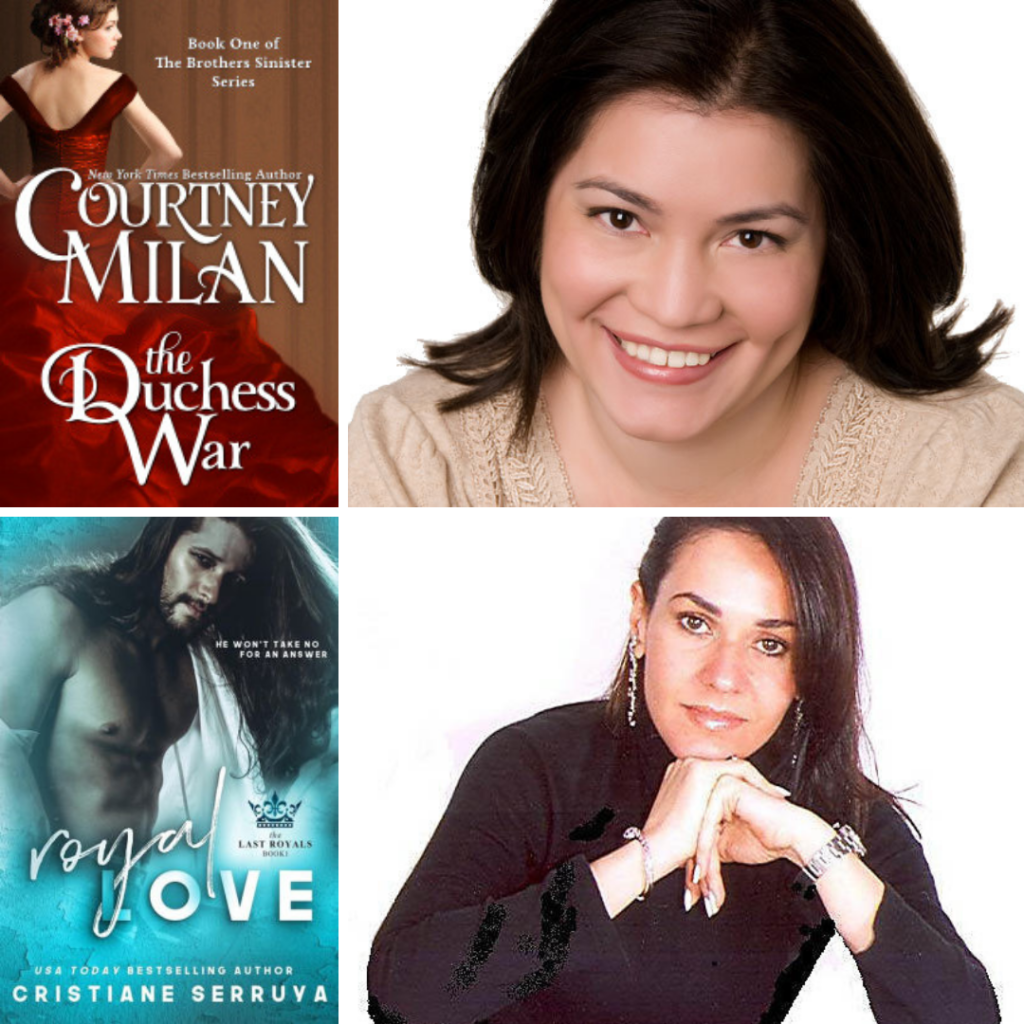 There’s yet another plagiarism scandal.

But this time, the plagiarist took on all the wrong people.

You do not want to anger Romancelandia; it will come after you.

The story began on Monday, with a blog post from Courtney Milan announcing “Cristiane Serruya is a copyright infringer, a plagiarist, and an idiot.” In the post, Milan layed out irrefutable evidence of plagiarism by Serruya, a self-published author. Multiple scenes and paragraphs from Milan’s historical romance, The Duchess War, appear nearly verbatim in Serruya’s contemporary romance, Royal Love.

That post, and Milan’s follow-up remarks on Twitter, ignited a  tweet-storm hashtagged #CopyPasteCris, as authors, fans, and bloggers discovered more and more evidence of plagiarism in Royal Love and at least some of Serruya’s other books. The list of works from which she plagiarized is now up to “at least 35 books, 27 authors, 2 recipes, and 2 articles,” according to Caffeinated Fae, who has been keeping a running list on her blog. That list includes some of the biggest and most recognizable names in romance: Loretta Chase, Tessa Dare, Lisa Kleypas, Sarah McLean, Kresley Cole, even Nora Roberts.

The response among the romance community has been strong, leading KJ Charles to note that one advantage to writing your own books is “never… waking up to the whole paramilitary wing of Romance Twitter descending on you like armoured pterodactyls” — an image that delighted some members of the community. When some outside the romance community expressed surprise at the fierce, rapid, and widespread condemnation of Serruya’s actions, author Beverly Jenkins tweeted, “It always amuses me when we drag people to hell how shocked people are… I guess they equate romance writers with being mild mannered and meek, not the fierce, sword wielding bitches we can be.”

But in all of this, how has Cristiane Serruya herself responded? According to The Guardian and other sources, Serruya initially proclaimed her innocence and blamed everything on the ghostwriter she hired to write the book. By Wednesday around noon, however, both Serruya’s Twitter account and her website had been deleted, and even the domain name has been abandoned. (I verified these deletions myself.) As of Wednesday evening, her Amazon page still exists, but her Kindle books have mostly been taken down, except a few in Italian. Barnes & Noble has some of her paperback books, though, including Royal Love; so does Amazon via third-party sellers. And her books are still available on Audible. (See below for an interview with Serruya.)

Serruya’s biography states that she is a lawyer with an MBA in business law (!) who decided in 2012 to “give writing a go.” (Goodreads)  Except that by her own admission and the reports of several ghostwriters who have come forward, Serruya didn’t actually write her books, or at least not all of them. According to this ghostwriter who commented on Milan’s original post, and who worked on two of Serruya’s novels, Serruya hired her to write a novel and gave her “a number of mishmashed scenes that needed ‘expanding’.”  If true—and several tweets from other ghostwriters bear her out (see #CopyPasteCris; sorry, I don’t have time to track each tweet down again!)—it seems likely that Serruya  provided the plagiarized scenes and paragraphs to her ghostwriter.

The mindblowing aspect of the whole thing is: How on earth did she think she would get away with it?  It’s bad enough to plagiarize at all, but when you do it on this scale, and steal from so many well-known, well-loved authors, whose books have sold hundreds of thousands of copies… it was inevitable that eventually, someone would recognize a scene or moment from another author’s book, and raise a stink. And that’s exactly what happened.

Meanwhile, Courtney Milan, who has a solid background in law, has written a second post advising her fellow authors what to do.  She has also referred the issue to Romance Writers of America’s Ethics committee—of which Milan is chair, so she has recused herself from the investigation. According to tweets from RWA, Serruya’s book has been removed from consideration for this year’s RITA award, and any books assigned to Serruya to judge have been reassigned.

Thursday morning, the editor of Royal Love asked Courtney Milan to post her apology, in which she admits she did not recognize any of the plagiarized bits. It was her first editing job, so she may perhaps be forgiven for that. In future, it might be wise for freelance editors and ghostwriters to run the text through plagiarism checkers first, or at least google any bits that don’t feel consistent with the author’s overall voice.

One final point was made by author Kilby Blades, in a post titled “We’re Missing Something Big in this Cristiane Serruya Story”: The plagiarism is bad enough, but the admission that she used a ghostwriter points to a much bigger problem in the publishing and self-publishing industry as a whole. When “authors” game the system by exploiting ghostwriters to churn out book after book in rapid succession, boosting their Amazon sales and rankings, it gets much harder for legitimate writers to compete. The use of ghostwriters isn’t limited to self-publishing, and it’s not illegal per se. Nor is it always unethical, particularly if the ghostwriter gets credit. But the use and even exploitation of ghostwriters is rampant in self-publishing as a means of rocketing an author to bestseller status, largely because of the way Amazon’s system works. Please read Blades’s post, which lays out the issue clearly and in more detail.

And you might also like to read this excellent post by paranormal author Jami Gold, which summarizes the story, validates the plagiarism, upholds the legitimate functions of ghostwriters, and finally gives suggestions for what authors and readers can do in the future.

Nora Roberts, whose works were also plagiarized by Serruya, weighed in on Friday with her experience of “Plagiarism, then and now.” Readers my age may remember that in the late 1990s, it was discovered that Janet Dailey had plagiarized from NR’s Sweet Revenge.

On Saturday, Medium published an article by Lucas Mota, a Brazilian author who decided to investigate and was able to get an email interview with Serruya. That interview, which appears at the end, is juxtaposed with Mota’s research, including using an online app called Fakespot to discover whether any of Serruya’s reviews were faked (yes), and a communication he received from a ghostwriter, who sounds like one of the ones that contacted Courtney Milan. (Caveat: The article contains grammatical and other errors which I assume are either because English is not Mr. Mota’s first language, or stem from a translation program. However, it’s worth paying attention to what he found. And it’s worth reading what Ms. Serruya has to say, simply because it’s the only thing anyone has gotten from her after those first few tweets. Whether you believe her, given the evidence, is up to you… but I suggest that if you haven’t yet read Nora Roberts’ post, you do so, because Janet Dailey’s response sounds very similar to Serruya’s.)

11 Responses to “Plagiarism rears its ugly head again. And Romancelandia is up in arms.”