I’ve been looking at the list of upcoming movies for 2013, and for a change, there are quite a few I might like to see. I don’t go to movies in the theater very often, but there are some movies that are really worth seeing on the big screen, while for others I’m content to wait for the DVD or streaming.  Here are the movies I’m looking forward to this year (not necessarily in this order):

1.  Top of my personal must-see list for 2013 is The Hobbit: The Desolation of Smaug, which won’t be out until next December.  I loved the first movie (An Unexpected Journey), and can hardly bear to wait for the second and third.  Oh, well, I ought to be used to it now, after waiting three years for The Lord of the Rings and who knows how many years for all the Harry Potter movies.  (Dec. 13, 2013.)

2.  I’m also excited about Ender’s Game (Nov. 1, 2013), which will star Asa Butterworth (Hugo) as Ender Wiggen.  Harrison Ford, Ben Kingsley, and The Help’s Viola Davis are among the adults at Ender’s military “school.”  I first read Ender’s Game as a serial novella when I was in my teens; it was amazing.  (Yes, I know, that dates me.)

3.  I would really love to see 42, the biopic about baseball great Jackie Robinson.  I’m not much of a baseball fan (I don’t think I’ve ever watched an entire inning, let alone a whole game), but Ken Burns’ Baseball documentary miniseries gave me a deep appreciation for the history bound up in America’s game. Robinson is an iconic figure in the history of integration and civil rights, and a man whom I greatly admire.  I saw a trailer for this movie last week, and it looks to me as if they’ve done a wonderful job with casting and direction. (April 12, 2013)

4.  I have very mixed feelings about Star Trek Into Darkness.  On the one hand, the first remake was fun, and this one has the same cast and director, plus the awesome Benedict Cumberbatch as the villain (rumored to be Khan.) On the other hand, the last one messed around with the Star Trek universe (everyone knows Romulans look like Vulcans, not humans), not to mention the laws of physics (the black hole stuff was frankly unbelievable), both of which irked me.  Nonetheless, I’ll probably go see it.  (May 17, 2013.)

5.  I’d like to see Austenland, based on the novel by Shannon Hale; the independent film just debuted at Sundance.  Sony has picked the it up for distribution, so it will probably show up on Netflix or Amazon streaming at some point. The Daily Beast had a nice review.

6.  Disney is taking on the Hans Christian Andersen fairy tale, “The Snow Queen,” in the animated Frozen.  I was quite pleasantly surprised by Disney’s Tangled,  which was charming and funny and thoroughly enjoyable.  The last I heard, Disney had sworn off fairy tales after Tangled, so I’m delighted to hear that they’ve changed their minds.  I know Disney well enough not to expect a faithful adaptation of the original story, which would have made for a short movie anyway; I’m curious to see what they’ve done with this one.  (Nov. 27, 2013)

7.  Speaking of Disney, Saving Mr. Banks could be marvelous if it’s done well.  The IMDB blurb describes the plot as as “Author P.L. Travers travels from London to Hollywood as Walt Disney Pictures adapts her novel Mary Poppins for the big screen.”  With Emma Thompson playing Travers, Tom Hanks as Walt Disney, and direction by John Lee Hancock (The Blind Side), I’m betting on wonderful.  (Not a Disney film, by the way.) (Dec. 20, 2013)


8.  Oz, The Great and Powerful purports to tell the story of the Wizard’s arrival and early years in Oz.  I saw the trailers last week, and it looks intriguing. Enough to see it in theaters?  Maybe.  (Mar. 8, 2013)

9.  Jack the Giant Slayer is another movie that looks like it could be fun based on the trailers, though I could probably wait for the DVD on this one.  (Mar. 1, 2013)

10. There’s also a new Superman movie coming, called Man of Steel, starring Henry Cavill as Superman and with a slew of big names (Russell Crowe, Kevin Costner, Laurence Fishburne, Diane Lane) in supporting roles.  The trailers looked interesting, but it will take a lot to live up to the first Christopher Reeve movie.    (June 14, 2013)

11.  OK, Despicable Me was disarmingly funny; I didn’t expect to like it as much as I did.  So although I’m always a little dubious about sequels (at least that weren’t planned in advance), I’m going to have to see Despicable Me 2.  Especially since they’re bringing in Al Pacino to voice the new villain.  Theater vs. DVD/streaming?  I haven’t decided yet. 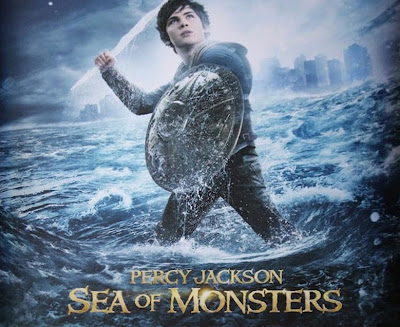 12.  I plan to hold off on Percy Jackson: Sea of Monsters until it comes out on DVD.  My daughter, who loves the Percy Jackson books, has flat-out refused to see Sea of Monsters because they changed so much from the first book.  I’m not so sure.  It might be interesting to see how they handle the script, considering that what the first movie changed/left out is a crucial piece of the ongoing story arc (regarding Luke; fans of the books will know what I’m talking about.)  But my heart won’t be broken if I don’t see it at all. (Aug. 16, 2013)

There are a surprising number of fantasy and SF movies coming out in 2013 — or perhaps not so surprising, given the popularity the genre has enjoyed since LOTR and the Harry Potter franchise.  It seems to me there are fewer romantic comedies than there used to be.  The only major historical costume drama I found is the remake of The Great Gatsby with Leonardo DiCaprio.  I’m sure there are other movies that will pique my interest as I learn more about them — the new Tom Clancy/Jack Ryan film, starring Chris Pine (Captain Kirk) and directed by Kenneth Brannagh is one, and possibly the Lone Ranger movie with Johnny Depp.  I’m not sure about The Mortal Instruments: City of Bones; perhaps I’ll read the book before I decide.

Which movies are you most looking forward to, and why?