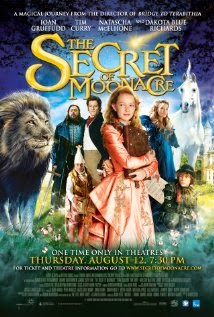 The Little White Horse remains one of my favorite children’s books of all time. When I found out it had been made into a movie, I was both excited and apprehensive, and immediately borrowed it from Netflix.

It turns out I was right to be apprehensive. In filming The Secret of Moonacre, the movie’s writers and directors made a number of drastic and completely unnecessary changes to the characters and storyline.

Look, I know that film is a different medium than print, and that some changes are often necessary to make the story work on screen. I’m fine with the Lord of the Rings films, because Jackson stayed true to the overall spirit and feel of the original despite some alterations. That is decidedly not the case with The Secret of Moonacre.

To begin with, the plot bears only a superficial resemblance to that of the original book. The screenwriters have distorted the legend of the Moon Princess in ways that make the entire story both less believable and less charming than the original. I particularly hated the whole “entire valley will be destroyed” threat. And some episodes are missing entirely.

But I was even more upset over the way in which the central characters’ personalities were altered.  For instance, the movie version of Uncle Benjamin is an abrupt, brooding man, not at all the hearty, caring guardian he is in the book.  Loveday, rather disconcertingly, has been recast as a de Noir rather than a Merriwether connection, and in keeping with the revamped Moon Princess legend, she’s a bit New-Age.  Coeur de Noir himself is portrayed as a villain without any redeeming features, unlike the character in the book.  Worst of all, Robin is transformed from a delightful childhood companion into a pouting, kohl-eyed, black-leather-clad bad boy (and the despised son of de Noir).  And Maria, far from being the fearless and determined young lady of the book, actually tries to run away to escape her “destiny.”

The production values weren’t too bad, particularly the sets, which are frankly gorgeous. The costume design, on the other hand, was rather odd. For all its fairy-tale feel, the book is set in an idealized rural 19th-century England, and I expected reasonably historical garb (especially given the book’s loving descriptions of Maria’s outfits!) Instead, we were treated to a quirky mix of various historical eras and fantastical, Wonderland-ish elements. As for the performances, some of the actors were a bit over-the-top, though Tim Curry, at least, gave every evidence of enjoying his over-the-top-ness to the hilt.

I will be fair and admit that most of my quarrels with the movie are due to the ways in which it distorts and violates the spirit of the book.  If you haven’t ever read The Little White Horse, the movie may be watchable, perhaps even enjoyable, particularly for older children. It’s visually appealing despite the odd costuming, and the cast includes Tim Curry, Ioan Griffudd, Juliet Stevenson, and Dakota Blue Richards, none of whom are lacking in talent.

But if, like my daughter and me (and a number of Netflix reviewers), you loved The Little White Horse, do yourself a favor and skip the movie altogether.  Instead, curl up with a nice cup of tea and some ginger biscuits or scones, and share the book with someone who’s never read it.  You’ll both be better off.