FutureBook has an interesting opinion piece by Emma Wright on “The Future of the Book Business: A Classicist’s View.” It’s a well-written, well-reasoned argument for what the publishing industry is doing wrong and what it should be doing to deal with the digital future, though Wright offers no new, groundbreaking ideas for the latter.

In less polished prose, Nick Atkinson argues in favor of subscription services as the future of e-books (“Is subscription the future model for E-book retail?”)  Comparing book consumption to movie consumption, and looking at the success of services like Netflix and Amazon Prime, he suggests a similar model for e-book lending services.

Although I’ve toyed with the idea of a virtual subscription library myself, I see several flaws in Atkinson’s argument.  To begin with, he doesn’t address the issues Netflix and Amazon are facing in terms of limited availability from content providers and rising content costs.  For instance, Disney movies aren’t available for streaming through either service, although you can pay to stream them through Disney’s own website — at a considerable fee; The Lion King is currently $14.99.  (To be fair, if I understand correctly, you pay that fee once and receive the right to stream the film as many times as you like, but it’s not a download; you can’t legally keep a copy on your computer.)  Since major book publishers have shown themselves more than willing to pull out of current subscription-type deals — i.e., Overdrive — it’s hard to believe they would embrace the subscription-service model, particularly through an “umbrella” subscription provider analogous to Netflix, where many publishers’ titles would be available to readers through a single service.

As for rising costs, content providers have recently begun charging streaming services like Netflix and Amazon more for their products.  This forced Netflix to increase its fees and split apart their DVD-rental and streaming services last summer; I’m waiting to see if the cost of Amazon Prime membership goes up next year (or if they will follow Netflix and separate the streaming and “free” shipping services)  The fact that the major book publishers so eagerly embraced the agency model for e-book pricing suggests that they are not at all willing to accept the lower per-reading fees they would almost certainly receive if they agreed to a subscription-service model. 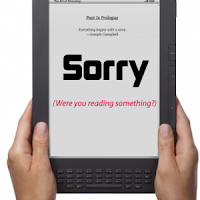 Another issue Atkinson fails to address is that of longevity, for lack of a better term: how long a given title would be available through a subscription service.  Atkinson suggests that even among those who like to reread books (a relatively small percentage of readers in his view, though he offers no statistics to back up that claim), many would be willing to have the book in a subscription cloud.  Speaking as someone who does reread frequently,  and usually more than once per title, my worry is that a favorite book would be withdrawn from “circulation,” so that it would no longer be available to me.  It could happen easily enough; my Netflix queue already contains five or six titles which were available on DVD when I queued them, but which Netflix no longer has.  DVD is a physical medium, to be sure, and those copies were no doubt lost or damaged, but e-books have gone “out of print” as well.  Two years ago, while deciding whether to buy an e-reader, I looked to see if Robin McKinley’s Beauty was available; it was.  By sometime last year, when I tried to purchase it, the e-book had been withdrawn from all stores, and has not reappeared to date.

My conclusion?  Publishers are far from ready to accept a subscription model; in fact, they seem at this point to be actively opposed to it.  (Google almost any combination of “Overdrive,” “Penguin,” “Random House,” and “libraries” for plenty of articles about the ongoing war between publishers and libraries over e-books.)  The market for such a service may exist and may even be widespread, but judging by their recent actions, publishers are still uncomfortable with the

I do have my own suggestion for publishers, though I’m fairly certain they’ll ignore them:

1. If you ever do decide to go with a subscription model, do it right.  Join forces with other publishers to create a single, unified service where readers can choose books from all (or at least all major and many smaller) publishers, just as they can in a bookstore or library.  Set a fair pricing schedule; it’s perfectly reasonable to charge a higher amount to people who read more books per month, so set several subscription levels, but keep the service affordable at every level.  A subscription service shouldn’t cost as much as buying each item separately (or what’s the point?)  And finally, guarantee that once in the system, a title will stay available unless it’s replaced by an updated edition.

2. If you don’t want to go subscription, then start offering e-books for sale under two price points, like Amazon does for its pay-to-watch video: one (lower) price to read the book once, after which it’s locked or disappears the reader can’t open it again, and a somewhat higher price* for an unlimited license to the title, so the reader can read it as many times as s/he would like.  There are technical challenges to the one-time license part of this, but I’ve borrowed e-books from the library and had them lock up once the lending term expired, so it’s certainly feasible.  In fact, if you publishers are really smart, you’ll figure out how to let readers buy the one-time license, then apply that fee to the purchase price if they later want to convert to the unlimited access version.

3. And finally, remember (as Emma Wright points out) that if you don’t get people reading, especially children and young adults, your market is bound to shrink as older readers die off.  That means you need to support, not undermine, institutions that encourage and support reading and build excitement around books: libraries, schools, bricks-and-mortar bookstores, book festivals, etc.  Support them vigorously, even when it seems to negatively impact your bottom line.  Believe me, nothing will impact your bottom line as badly in the long run as a growing population of non-readers.

* The unlimited e-book license should still cost somewhat less than the print-book price, given that the e-book can neither be sold nor given away and therefore isn’t really something the purchaser “owns.”  Publishers, you might take note that many movies are already priced like this; a digital download usually costs less than purchasing a DVD or Blu-Ray version of the same film, because the purchaser doesn’t receive — and the publisher doesn’t have the associated costs of — a hard copy.  Clearly, movie distributors understand fair e-pricing better than book publishers do.