I saw The Hobbit: The Desolation of Smaug with my family on Thursday night.  First impressions: I really enjoyed it. Parts of it had me laughing, while parts had me on the edge of (or nearly jumping out of) my seat. And I couldn’t watch the spiders at all, other than the occasional peek. (Apologies if that’s a spoiler, but I figure that anyone familiar with the book knows about them already.) 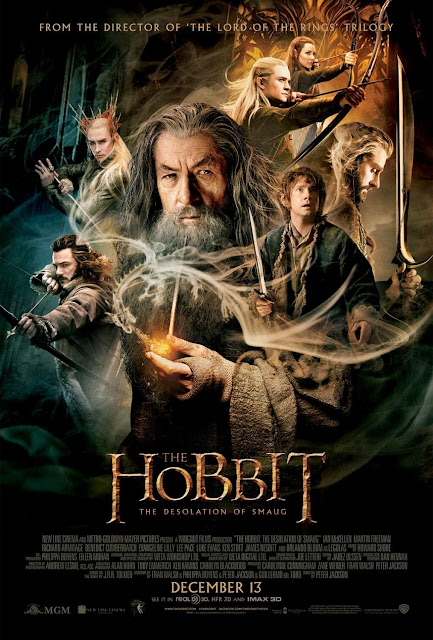 The movie is, of course, visually gorgeous, and there are some very good performances to go with the fantastic sets, costumes, makeup, and special effects. It’s a testament to both the writing and Richard Armitage’s acting that I like movie-Thorin despite his arrogance and stubbornness, and I understand why his dwarves and even Bilbo follow him — neither of which I ever really got from book-Thorin. Martin Freeman is of course marvelous as Bilbo, showing the hold the Ring is beginning to exert on him as well as his growing courage. I don’t think Ian McKellan is capable of a bad performance, and Benedict Cumberbatch’s Smaug is terrific – just over-the-top enough to be convincingly draconic, without (quite) going over the edge into parody-villain. They’ve deepened and roughened his voice to make it suit the immensity of the CGI dragon, but if you know it’s him, you can hear flashes of Khan here and there. 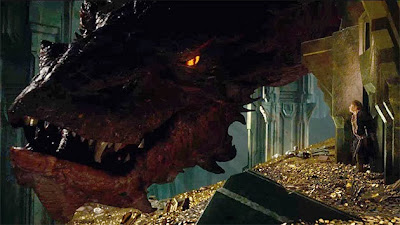 However, the writers and director did add a great deal of material, some from the LOTR appendices and Tolkien’s other works, but some completely original to the movie. And when I say a great deal, I mean a great deal. Almost half the movie is different from (or in addition to) the book.  While the purist in me is trying hard to be horrified, I have to admit that on the whole, their choices work, and serve to strengthen and deepen characters, increase tension, and avoid some of the improbably lucky coincidences on which the book’s plot turns.

I was surprised that we spend so little time at Beorn’s house.  More surprising was how much the filmmakers condensed the time in Mirkwood — though the scene with the spiders was more than long (and scary) enough for me.  We don’t spend as much time in the Elven halls as I expected, either, but the expansion of the Elven king Thranduil’s character, giving him a complexity and nuance not seen in the book, makes up for the brevity.  If you’ve seen the trailers, you’ll know that Legolas appears in the movie, though he’s not even mentioned in the book; since we do know from LOTR that he’s the son of the Elven king in Mirkwood, it makes a lot of sense to include him.  Legolas’s relationship with his father is more complex than I anticipated, and I’m curious to see where those two characters go in the third movie.  By the way, don’t miss Gloin’s brief mention of “my son, Gimli.” It’s a delightful moment, since LOTR fans know what good friends Legolas and Gimli will eventually become — despite hints that Legolas will have personal reasons to dislike dwarves. 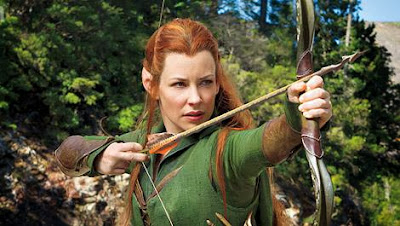 One of the most controversial changes is the introduction of Tauriel, the female elf.  I admit I was skeptical before I saw the movie, but the filmmakers managed to make her interesting and important rather than the token female I feared she would be, giving her real character and motivation as well as several rather significant scenes — not all of which involved fighting.  She serves as a bit of a conscience to Legolas, reprimanding him at one point for the Mirkwood elves’ isolationism, and her interactions with the dwarves, while decidedly not canon, will undoubtedly prove influential in more ways than one.

There have also been some complaints about the scenes showing Gandalf’s movements while the dwarves are in Mirkwood and at the Lonely Mountain, but these scenes, at least, are based on material found elsewhere in Tolkien’s work, even if the details are conjectural.  In fact, this installment of the movie trilogy continues and deepens Peter Jackson’s attempt to tie what is otherwise an episodic children’s adventure tale to the darker, more epic events of The Lord of the Rings trilogy.  For that, I give Jackson full marks.

One thing did irk me: this movie ignores the laws of physics even more than the last one did.  I’m not just talking about Legolas’s amazing fighting skills and unusual balance; after all, he’s an Elf, and they’re supposed to be more than human. But I do expect dwarves and hobbits to be subject to the laws of gravity and thermodynamics, and without giving too much away, well… apparently they are not.

But that’s a minor quibble about what was otherwise a very good movie. All in all, I recommend The Desolation of Smaug if you enjoyed An Unexpected Journey. If you’re very familiar with the book, try to go in with an open mind. Oh, and by the way, don’t expect a tidy ending; this one is definitely a cliff-hanger.

16 Responses to “The Hobbit: The Desolation of Smaug (review)”