I had a spectacularly busy week on the non-blogging front, so this week’s News & Notes is a little sparse, but there are some interesting links. Have fun!

Graham Joyce, author of a number of dark fantasy novels and several YA novels, died two weeks ago on Sept. 9, 2014, at the age of 59. Joyce is perhaps best known for The Tooth Fairy and Some Kind of Fairy Tale. His newest book, The Ghost in the Electric Blue Suit, had just been released in August in the U.S. (It was published last year in Britain as The Year of the Ladybird.)

Obituaries: The Los Angeles Times; The Guardian;  Locus Online; i09. You can also read some of Joyce’s blog posts on writing, cancer, and life on his website. 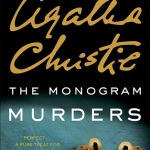 The Monogram Murders, by Sophie Hannah