Top Ten Tuesday is a weekly feature/meme hosted by The Broke and the Bookish.  This week’s topic is Top Ten Words/Topics That Instantly Make Me Buy/Pick Up A Book.

I’ll have to go with “Words/Topics That Instantly Make Me Pick Up A Book,” because almost nothing is an insta-buy for me — certainly not words or topics, and recently, not even an author’s name.  (I’m getting more selective as my shelves get fuller and my budget gets a little tighter.)   But there are certainly words and topics guaranteed to make me pick up a book and take a second look.  In no apparent order:

I know I’ve only come up with eight, but the others I’m coming up with are too broad (fantasy, magic, 19th-century romance), and they don’t guarantee I’ll pick up a book or even give it a second glance.  So these will have to do!

Ten Books I Just Added to My TBR 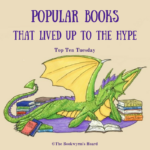 Popular Books That Lived Up To the Hype

14 Responses to “Top Ten Tuesday: Words/Topics That Make Me Pick Up A Book”