Top Ten Tuesday is a weekly feature/meme hosted by The Broke and the Bookish.  This week’s topic is Top Ten Favorite Movies/TV Shows.

These are all movies or shows I’ve watched more than once — favorites I return to, rather than necessarily “best” in a critical sense. (“Best” would generate a different list, though there would be some cross-overs.)

I left it at nine, because there were about 15 movies vying for the 10th slot, and frankly, I couldn’t choose between them. Mary Poppins? Stardust? The King’s Speech? The Princess Bride? Hunt for Red October? Apollo 13? Fiddler on the Roof? The Wizard of Oz? Too many good ones and no way to narrow it down.

Yes, that’s eleven, if you’re counting. I figured I saved one on the movies, so I added an extra to TV.

And in case you’re wondering why Dr Who isn’t on there, it’s because I’ve only just started watching it (I’m still in season 2), so it isn’t yet one I watch and rewatch. Give me a year or two, and it will probably turn up on the top ten! 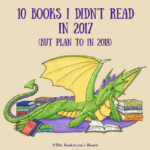 The Ten Authors I Most Want to Meet

19 Responses to “What I Do When I’m Not Reading: Favorite Movies & TV Shows”