One of the genres I enjoy is mystery, and particularly British mystery.  Five women dominated the “Golden Age” of British mystery: Agatha Christie, Dorothy Sayers, Ngaio Marsh, Josephine Tey, and Margery Allingham.  Of the five, Christie and Sayers are probably the best-known. Christie and Marsh enjoyed the longest reigns.  Sayers and Tey are the most literary of the five, and Allingham is decidedly the quirkiest. I reviewed Ngaio Marsh’s Roderick Alleyn mysteries back in October 2009 (one of my first posts on this blog.)  Over the next few months, I’ll review the rest of the “grande dames”, along with some of my favorite later authors such as Dick Francis, Deborah Crombie, and Catherine Aird.  Laurie R. King is also among the latter;  I reviewed her Mary Russell/Sherlock Holmes series in March 2010.

Do you have any favorite British authors?  Tell me whose books you love, and why, in the comments below! 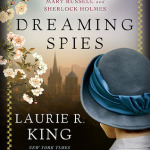