I was first introduced to the Library Lover’s Mystery series when I read a review of the third book by Dollycas at Escape with Dollycas Into a Good Book.   Being a fan of both cozy mysteries and libraries, I hurried off to my library, borrowed the books, and devoured all three as quickly as I could.

Lindsey Norris heads the public library in Briar Creek, a small coastal town in Connecticut.  In the first book, she’s a recent arrival, having been downsized from her job as an archivist at Yale at around the same time she discovered her law-professor fiancé in bed with a grad student.  Her close friend Beth, who recommended her for the job, has been the children’s librarian there for several years.  The town boasts the usual complement of engaging and/or eccentric secondary characters, including Lindsey’s landlady Nancy and her nephew Charlie, an aspiring rock musician; Milton, the 82-year-old yogi and library supporter; Mary and Ian, who run the local restaurant; and Mary’s brother Sully, an ex-Marine who runs a water taxi and tour boat business – and is apparently interested in Lindsey.  There are also portly chief of police Daniels, who is out of his depth with murder, and Daniels’ second, Officer Emma Plewicki, who is a bit more on the ball.  Other library staff members, patrons, and townsfolk round out the cast of characters.
In the first book, Books Can Be Deceiving, Beth’s fiancé, an award-winning children’s book author/illustrator, is murdered in his island home shortly after breaking up with Beth and immediately after she discovered he had plagiarized her art and ideas for his next book.  Chief Daniels sets his sights on Beth as main suspect, but Lindsey is determined to prove her friend’s innocence.

Due or Die finds the newly-elected president of the Friends of the Library accused of murdering her husband.  Lindsey’s investigation is complicated by her acquisition of a puppy left in the book drop, the anger of the outgoing president and threats by one of his ardent fans, and a nor’easter that knocks out power, and the destruction of the library’s storage shed.
The third book, Book, Line, and Sinker, brings treasure hunters to the town’s islands – real ones, intent on finding one of the buried hoards of notorious pirate Capt. Kidd.  Also in town is Lindsey’s former fiancé, John, who wants her back.  (Not if Sully has anything to say about it!) Tensions escalate between treasure-hunt promoter Trudi Hargrave and Lindsey’s friend Milton, an environmentalist.  When Trudi’s body is found in the excavation pit on Pirate Island, Milton becomes the chief suspect… and then the treasure map disappears.  As usual, Lindsey tries to come to her friend’s rescue and find the map, encountering a fair bit of danger herself along the way.
What works: This series is a lot of fun.   I really like Lindsey; she’s got the perfect blend of smarts, loyalty to her friends, courage, and blind spots for a cozy heroine.  The decisions she makes aren’t always wise, but her motives and reasoning are clear.  It’s also fun to watch the developing relationship between Lindsey and Sully.  I would like to see more of Sully; it seems to me there are depths there that haven’t yet been revealed.

The mysteries are fairly well-plotted, and move along at a good pace.  While I usually spotted the murderer before the solution was revealed, the author managed to surprise me with an unexpected twist at least once in each book.  Her prose style is solid and very readable, with a good balance of description, explication, and action.  For the most part, her secondary characters avoid the cardboard-cutout syndrome; we may not spend a lot of time with them, but most of them (victims excepted) have enough quirks or break enough with stereotype to hint at a real, believable person.  Some of the recurring characters also develop as the series goes on, particularly Chief Daniels.
The books are quick reads; none of them took me much more than an hour or an hour and a half to finish.  I’m putting that in the plus column, because sometimes, that’s exactly what I’m looking for: a light, engaging book that doesn’t take a lot of time or mental effort to read.  (My sister calls that kind of book “mental popcorn” – a snack, rather than a full meal.)
Drawbacks: The series faces the usual problem of all cozy series with an amateur detective:  the unlikelihood of a law-abiding citizen becoming involved in so many murders and contributing substantially to their solution.  (Not to mention the number of murders that seems to happen in all these small towns.  Their per-capita murder rates are so high, you wonder why the inhabitants don’t just move away.)   If you love cozy mysteries, you’ve already learned to suspend your disbelief on this issue, so it shouldn’t bother you too much.
My conclusion:  If you like light or cozy mysteries, this is a well-written and truly enjoyable series.  The only reason I didn’t rate it higher is that it is mental popcorn — but very tasty caramel popcorn, not the bland plain kind.
Rating: 3 ½  stars
Recommended if you like: cozy mysteries, village/small town mysteries, libraries

EDITED TO ADD:  I’m counting these 3 books toward the Cruisin’ through the Cozies 2013 challenge. 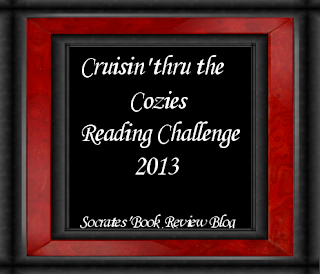 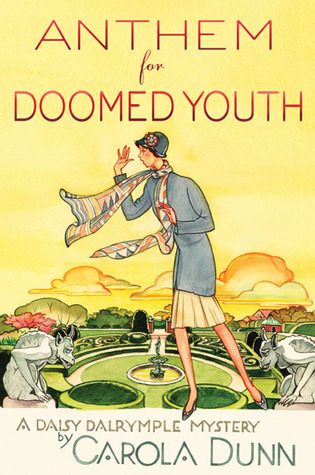 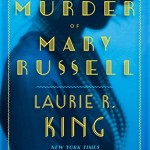 The Murder of Mary Russell – Revie 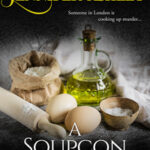 A Soupçon of Poison, by Jennif