I first discovered Louisa May Alcott in elementary school, and I fell in love with her books. I owned two battered copies of Little Women and Eight Cousins, which I read over and over. I added copies of Little Men and Jo’s Boys when I found them, and discovered A Rose in Bloom in high school and An Old-Fashioned Girl as an adult… which is also when I became interested in Alcott herself. 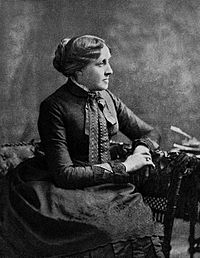 Louisa May Alcott was born in Germantown, Pennsylvania, on Nov. 29, 1832, the second of four daughters of Abigail May and Amos Bronson Alcott. The Alcotts soon moved to Massachusetts, and the girls grew up in Boston and Concord. Bronson and Abby May were transcendentalists; their friends included Ralph Waldo Emerson, Henry David Thoreau, and Nathaniel Hawthorne, all whom contributed to Louisa’s instruction (she was taught at home, primarily by her father.)

Alcott was a tomboy, much like Jo March, the protagonist Alcott based on herself in Little Women. Also like Jo, Alcott began writing at an early age, penning melodramas that she and her sisters acted out for their friends.

Despite their literary connections, the family was often quite poor, and once she was old enough, Louisa worked as a housemaid, governess, seamstress, and teacher to help support them. She also continued writing, publishing her first book, Flower Fables, when she was 22.

The Alcotts were abolitionists who once served as a station on the Underground Railroad. As an adult, Louisa was both an abolitionist and a feminist. During the Civil War, she worked as a nurse in Washington for six weeks; she contracted typhoid and nearly died. Her letters home were published in a Boston paper and later collected as Hospital Sketches (1863), the book which first brought her recognition.

Before Hospital Sketches, Louisa had been writing “sensational” novels and melodramas under the name A. M. Barnard. Little Women, based on herself and her sisters and written in 1868 in response to a request from her publisher, brought her fame and modest fortune — enough to make her financially independent. Alcott followed it up with Good Wives (now usually published with the first book under the title Little Women), Little Men, and Jo’s Boys, taking the March sisters into adulthood — and exploring her father’s and her own ideas about education, equality, and women’s role. She continued those themes in other books for young people, including Eight Cousins, A Rose in Bloom, and An Old-Fashioned Girl.

Unlike Jo March, the author never married. She found romance with a young Polish man while traveling in Europe, and based Laurie (Little Women) on him, but the relationship apparently ended and she returned to America. Little is known about their romance, because she later destroyed the diary pages in which she had written about him.  Alcott did, however, raise a child: her namesake Louisa, the daughter of her youngest sister May, after May’s death from childbed fever.

Louisa May Alcott was chronically ill during her later years. She died on March 6, 1888, at the age of 55, just two days after the death of her father. For many years, it was thought that her health was affected by the mercury compound given to her during her bout with typhoid, but recently, researchers have suggested she had an autoimmune disease, possibly lupus. Alcott is buried in Sleepy Hollow Cemetery in Concord, Massachusetts. illustration of Jo March writing in the attic, by Norman Rockwell

I loved Little Women as a child, and I love it still. (And by Little Women I really mean Little Women and Good Wives, now usually sold as a single volume.) Little Women had everything I wanted in a book: the siblings I lacked, the single mother and far-away father I had, adventure, comedy, drama, tragedy, pathos, courage.

Jo’s independent streak, her unruly tongue, and her tomboyish ways endeared her to me. Amy’s pretentious airs annoyed me, but I secretly liked her too. I always thought that Meg got short shrift, especially after she married Mr. Brooke. And Beth I simply loved, because how could you not? To this day, I can’t not cry when Beth dies.  I can’t even think about it without tearing up.  And when Jo finds the boxes in the attic and writes a poem about them, that usually reduces me to tears all over again.

Laurie was dashing and fun — and I still sort of ship him and Jo, although even as a child I could see that they are too alike and too volatile to have made a good marriage. I never quite reconciled myself to her marriage to Prof. Bhaer, though in the sequels it’s clear that they love each other and the life they’ve created together.

In fact, almost everything about the book appealed to me, except the occasional lapses into preachiness (not uncommon in Victorian-era children’s books, and not as irritating or intrusive as in most.)  I also enjoyed the two sequels, Little Men and Jo’s Boys, although they are not quite as real and compelling nor, perhaps, as well-written as Little Women. And I’m quite fond of Eight Cousins, A Rose in Bloom, and An Old-Fashioned Girl as well… but I still think Little Women is the best and most moving of all of them.

[Review adapted from my Classic Children’s Books post, and a few more of my lists that include Louisa May Alcott.]