The Secret of Bow Lane (Jennifer Ashley) – 08/02/2022. Historical mystery; #6 in the Kat Holloway series (reviews). The wife of the man whom Victorian cook Kat Holloway once believed herself married to asks Kat to investigate his murder… though Kat believed he had died at sea. I love this series; they are always on my to-read list. I’ve already read this one, but I’m excited for everyone else who is looking forward to it.

Mistress of Birds (Celia Lake) – 8/15/2022; no link available at this time. “Thalia’s writing career is going very poorly. She agrees to take care of her great-aunt’s estate on the edge of Dartmoor as a favour to her family. But the longer she’s there, the odder it is. And there’s that mysterious man in the apple orchard.” Celia Lake’s indie historical fantasy romances have become something of an obsession of mine. They’re slow-paced, low-angst, often thoughtful stories in which love grows slowly, often as the couple work on solving a problem or puzzle in their world. Ms. Lake’s Albion is a magical world set alongside the historical Britain (much like Harry Potter’s wizarding world, without the extreme danger and rampant eccentricity); the books are set mostly between World Wars I and II.

The Drowned Woods (Emily Lloyd-Jones) – 8/16/2022. Mer is the last living water diviner in Wales, and has spent years running from the prince who abused her gift to find and poison the wells of his enemies. “Then Mer’s old handler returns with a proposition: use her powers to bring down the very prince that abused them both… With a motley crew of allies, including a fae-cursed young man, the lady of thieves, and a corgi that may or may not be a spy, Mer may finally be able to steal precious freedom and peace for herself. After all, a person with a knife is one thing…but a person with a cause can topple kingdoms.”

The Very Secret Society of Irregular Witches (Sangu Mandanna) – 8/23/2022. Contemporary fantasy romance “about an isolated witch whose opportunity to embrace a quirky new family—and a new love—changes the course of her life.” This book is everything I had hoped for: funny, heartwarming, and delightful. I can’t wait until it’s out in the world!

A Dreadful Splendor (B. R. Myers) – 8/23/2022. “In this spectacularly imaginative and ghoulishly fun Gothic murder mystery brimming with romance, betrayals, and chills, a fake spiritualist is summoned to hold a séance for a bride who died on the eve before her wedding, but as nefarious secrets are revealed, the line between hoax and haunting blurs.”

Murder in Westminster (Vanessa Riley) – 8/30/2022. Historical mystery. “The first in a vibrant, inclusive new historical mystery series…portrays the true diversity of the Regency-era, as a widow whose skin color and notorious family history have left her with few friends she can rely on – just as the local vicar names her the prime suspect in a murder case…” This checks a lot of my boxes: historical mystery, diverse, Regency era, and there might even be a faint whiff of romance. (Although since it’s a mystery series, any potential romance will probably be a slow burn across multiple books.)

Top Ten Tuesday: Top Ten Most Anticipate
In the Dragon’s Eye: Only a Promis 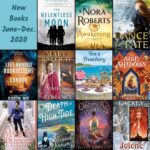 My Most Anticipated Releases for July–
In the Dragon’s Eye: Revisionary
Waiting On Wednesday – 6/18/14