The Sunday Post is a meme sponsored by Kimba the Caffeinated Book Reviewer.  It’s a chance to share news.  A post to recap the past week, showcase books and things we have received and share news about what is coming up for the week on our blog.

Sunday, late afternoon:  I’ve just returned from two very good rehearsals, and I’m happy but exhausted.  The children’s and youth community choruses I direct had their first rehearsals for the spring season this afternoon, and they went really well — even though the accompanist couldn’t be there for the Youth rehearsal, and we were missing about a third of our members (mostly for illness or prior conflicts.)  But we have eight new children in the Junior chorus, which is fantastic!  And the kids who were there sang very well.  Now I’m really jazzed about this season’s concert.

I know from experience that there will come a time, several weeks before the concert, when I wonder whether we’re going to pull it off.  Did I give them a piece that’s too hard?  Did I schedule enough rehearsals?  Do I even have a clue what I’m doing?  And then, miraculously, everything will come together just in time, as it does every season.  The kids sing their hearts out in the concert, and they sound wonderful.  And every time, I find myself bursting with pride — not in myself, but in them.  In how they’ve risen to the challenge, and how they’ve learned to blend and sing as a group: one chorus, not a bunch of individual voices.

Reading has always been, from my early memories, both a sanctuary and an escape.  It feeds my spirit — it’s something I have to do.  Music is like that, too.  I need to sing as much as I need to read — though maybe not quite as often, and not in the same way.  Like reading, I can’t remember a time I didn’t sing.  Directing is still relatively new to me.  I’ve been directing the Junior chorus for four or five years now, the Youth for about two.  It’s challenging and terrifying and incredibly satisfying all at the same time.

Part of the challenge of having multiple passions is finding a way to balance them all.  And sometimes the balance has to tip one way for a little while, before returning to the midpoint.  This week was one of those times. I spent more time preparing for these first rehearsals, and for the spring concert season, than I did preparing new blog posts for the coming week. That means I’ll have fewer posts this week, as I try to catch up again.

But the smiles on those kids’ faces, and the sound of their voices as they began learning the new music?  Totally worth it.

The past week on the blog: 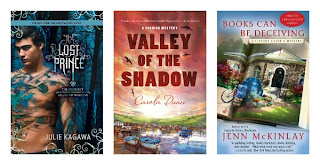 I think I’d better stop putting books on hold at the library for a little while!  In addition to these four, I still need to read Splintered (A. G. Howard), Beastly (Alex Flynn), The False Princess (Eilis O’Neal), Academy 7 (Anne Osterlund), and The Cabinet of Wonders (Marie Rutkoski).  That’s not counting my own HUGE pile of goodies from the last few library book sales.  (Note to self: must also find time to finish Kristen Britain’s Green Rider series.)