Top Ten Tuesday is a weekly feature/meme now hosted by That Artsy Reader Girl. The meme was originally the brainchild of The Broke and the Bookish. This week’s topic is Book Titles That Are Complete Sentences.

Books With Full-Sentence Titles (that I loved)

I don’t know about you, but I’m pretty much rubbish at ranking books I love against one another. And while these do range between 4, 4.5, and 5 stars for me, I still couldn’t easily choose one 5-star over another… so alphabetically it is.

Dance Upon the Air (Nora Roberts). The third book in the Three Sisters Island trilogy, and the most overtly magical. One could argue whether the title counts (is “dance” a noun or an imperative verb in this case?), but no one can argue me out of my love for this trilogy.

First Comes Scandal (Julia Quinn) I enjoyed this installment in Quinn’s Bridgerton-prequel Rokesby series, about a girl facing ruin after she’s abducted for her dowry, and the boy-next-door who marries her to save her reputation.

I’d Rather Be Reading (Anne Bogel) A memoir in essays, and a delightful book about a life spent with books.

Lady Derring Takes a Lover* (Julie Ann Long) A charming, funny historical romance that I found “both feminist and romantic, with wonderful characters and plenty of humor intertwined with deeper feelings.”

Light Thickens (Ngaio Marsh) The final book in Marsh’s Inspector Alleyn series, and one of my favorites. Marsh returns once again to her theater roots, crafting a murder which takes place during a production of Macbeth. The details about the production, and Marsh’s insight into the play, are as interesting as the mystery of who killed the famous star, literally in the middle of a performance.

Madam, Will You Talk? (Mary Stewart) Stewart’s first romantic-suspense novel is as well-written as her later ones, and remains one of my favorites. Stewart remains for me the best of the three “big names” in romantic suspense/gothic romance — possibly because she wrote such strong and interesting heroines, and because her books are, for the most part, much more “romantic suspense” than gothic. (The other two writers are Victoria Holt and Phyllis Whitney; to my mind, their books have not held up nearly as well over time. Stewart is the only one I reread.)

Nice Dragons Finish Last* (Rachel Aaron) “…an entertaining, well-paced urban fantasy featuring a dragon exiled in human form for being nice, rather than draconically rapacious and ruthless. Julius (the dragon) is a cinnamon roll, and his friendship (with just a hint of romance) with mage-on-the-run Marci is delightful.”

The Other Lady Vanishes (Amanda Quick) Quick’s books are always fun, and the second book in her Burning Cove historical-romantic-suspense series is no exception. Nor is The Lady Has a Past (Amanda Quick), the most recent installment. (Note: Amanda Quick is a pseudonym of Jayne Ann Krentz), several of whose books also appear on this list.

Promise Not to Tell (Jayne Ann Krentz) Atmospheric and suspenseful, with strong, intelligent heroines and wounded-but-strong, loner heroes, Krentz’s romantic suspense novels are pretty-much autobuys for me. I enjoyed both this one and Trust No One — as I have nearly all her books.

Some Die Eloquent (Catherine Aird) It’s not so much what Beatrice Wandsworth died of (diabetes) as what she died with (a small fortune in the bank, deposited shortly before her death) that attracts the attention of Chief Detective Inspector Sloan and his hapless sidekick, Constable Crosby. This is one of my top ten favorite mystery series of all time, due largely to Aird’s creative, meticulous plots, excellent writing, and dry humor.

Seduce Me at Sunset (Lisa Kleypas) I think I love the Hathaways series even more than the Wallflowers series, and that’s saying something. Both Seduce Me at Sunset and Tempt Me at Twilight qualify for today’s prompt, and while neither is my absolute favorite in the series, both are solid 4- or 4.5-star romances that I will happily read again and again.

You Had Me at Hola (Alexis Daria) 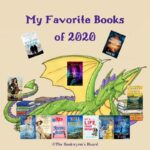