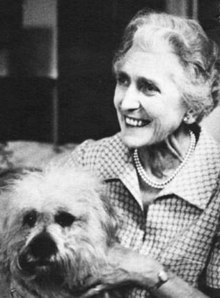 Today is Elizabeth Goudge’s birthday, and the start of Elizabeth Goudge Week over at The Emerald City Book Review. I’m so glad that Lori decided to celebrate by dedicating a whole week to Goudge, because she’s one of my favorite authors of all time.

The daughter of a clergyman, Elizabeth Goudge was born on April 24, 1900. She began writing in her late twenties or early thirties, starting with three plays, but when she submitted them for publication, a perspicacious editor told her to try novels instead. She did, and remained a best-selling author from the 1930s through the 1970s. She was painfully shy, and never married, spending her younger years caring for her invalid mother and serving (reluctantly) as her father’s hostess. After her mother’s death, she developed a friendship with a younger woman, Jessie Munro, who took care of her as she had her own mother. Elizabeth Goudge died in 1984, just a few weeks shy of her 84th birthday.

Goudge’s books have had a special place in my heart since I first encountered Linnets and Valerians in a London bookshop as a child, and fell in love with it. In my teens and twenties, I devoured her adult books, finding in them a sensitivity to place, a compassion for human failings, and a strong sense of a creative force for good that continue to resonate deep within me.

Goudge’s children’s books, particularly Linnets and Valerians and The Little White Horse, might today be classed as magical realism (The Little White Horse edges into fantasy.) They’re usually set in the 19th or early 20th century, often in the years of Goudge’s own childhood. Goudge never lost the ability to remember the magic of childhood, and it shines forth in her children’s books as well as some of her adult books.

Her adult books range from historical to contemporary fiction – contemporary meaning the period during which she was writing. Almost all are set in England, though her first adult novel, Island Magic (1934) takes place on the island of Guernsey and was  based on tales her mother told her about her own family and childhood. Elizabeth herself grew up in Wells (the Torminster of A City of Bells and its sequels) in Somerset and later Ely in Cambridgeshire, but spent many happy vacations with her grandparents in Guernsey; Green Dolphin Street is also set there.

While Goudge’s books sold well, they rarely received critical praise. The Little White Horse (1946) won a Carnegie medal, an award given annually to the best children’s book by a British subject. But her adult fiction was often labeled “sentimental” and dismissed as popular fiction. Ironically, when an Indian writer, Indrani Aikath-Gyaltsen, plagiarized The Rosemary Tree (often verbatim) in the 1990s, it was lauded by critics, though little had been changed except the setting and the religion of the major characters. (The plagiarism was spotted and reported to Goudge’s original publisher by a reader; Aikath-Gyaltsen died several months later, possibly of suicide.)

My own feeling is that her contemporary critics were led astray by Goudge’s compassion for her characters, which they mistakenly read as sentimentality, and by the Anglican faith that lies at the heart of her books, whether unspoken or overt. They failed to credit the care with which her books are crafted and her deep understanding of human nature. Optimism – and Goudge’s books are rife with optimism, though never of a shallow or facile nature – is often dismissed as naive by those who consider themselves sophisticated, and no doubt that too contributed to literary critics’ disregard for her work.

Every Goudge fan has their favorites. J. K. Rowling sparked a renewed interest in The Little White Horse when she mentioned it as one of her favorite children’s fantasies, and it remains one of mine as well. But I’m equally fond of Linnets and Valerians, of A City of Bells and its more fantastical sequel The Blue Hills, of Pilgrim’s Inn and Gentian Hill and The Rosemary Tree. There are others I plan to return to now that I’m older: The Dean’s Watch, The Scent of Water, The White Witch. While I enjoyed them when I first read them in my twenties, I think I will find them both richer and deeper now.

Some of Goudge’s books remain out of print, but The Little White Horse is still available, and Hendrickson Publishing has begun reprinting some of Goudge’s better-known adult novels in trade paperback and (more recently) in e-book format.*  It’s also possible to find most of her out-of-print titles through Abe Books. I do hope you’ll give her books a try.

* A word of caution if you buy ebooks: The Kindle edition of Gentian Hill, which was not produced by Hendrickson, appears to have been scanned and OCR’d without proofreading; there are numerous errors. Do yourself a favor and find a used physical copy instead.