Do you love Sherlock? Then check out this visual from Red Scharlach, “Otters who look like Benedict Cumberbatch.”

In case you’re wondering, Sherlock is a BBC series featuring a tech-savvy Holmes and Watson in modern-day London.  Brilliant writing, brilliant acting, brilliant adaptation.  (Can you tell I’m a fan?)  The series stars Benedict Cumberbatch (Tinker, Tailor, Soldier, Spy; War Horse) as Holmes and Martin Freeman (The Hitchhiker’s Guide to the Galaxy) as Watson. You can watch the first season on Netflix Instant Play.  The second season — three episodes — is currently airing on PBS in the US.  UK viewers got to see it months ago.  The third season has been contracted and will begin filming in early 2013.  The delay may be because both actors are currently involved in filming The Hobbit: There and Back Again, Freeman as Bilbo and Cumberbatch as the Necromancer and the voice of Smaug. 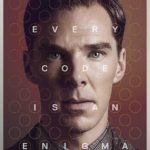