Top Ten Tuesday is a weekly feature/meme hosted by The Broke and the Bookish.  This week’s topic is Top Ten Favorite Books I Read Before I Was A Blogger.

Only ten? Aaack!  How the heck do I choose?  There are so many books I love, so many I’ve read over and over through the years.  This would have been a tough choice when I was 20; in my middle years, with so many more wonderful books to choose from, it’s practically impossible to pick just ten. 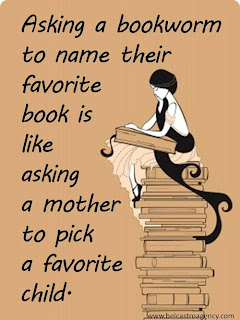 Since I couldn’t really narrow my favorites list down to just 10 books,  I decided to pick a few favorites from each of the genres I love – including children’s books.  (I don’t think you’re ever too old for the really good children’s books.)  These aren’t really my top ten.  They’re just among my top fifty or so.

You’ll notice that there are no romance novels on here.  The truth is that as much as I enjoy reading romance, I couldn’t come up with a specific book in that genre that I love as much as my best-loved books in the other fields, so in the end I left it out.  (That may be because I haven’t been reading romance as long as I have fantasy and mystery and so on — see the next criterion.)

I based my final picks partly on how many times I’ve re-read a book; if it’s on this list, you can figure that I’ve read it a fair few times.  That criterion tended to weed out most newer books.  There’s not a single title on here that isn’t at least fifteen years old, and most of them are quite a bit older than that.

I also had a hard time when it came to particularly prolific authors.  How do I choose one book by Anne McCaffrey or Mercedes Lackey, for instance?  Both are authors I love and re-read frequently, but when I do, I tend to go through whole series at a time – not trilogies or quartets but 8, 10, 12 books in a row.  In the end, I didn’t include either one, not because they didn’t belong on the list but because I just couldn’t choose.

With all that said, I left out at least five titles for every book I included on this list — so if you don’t see your own favorites here, that doesn’t mean I don’t love them, too!

The Lord of the Rings (J. R. R. Tolkien) I can count it as one book, can’t I?  My first “grown-up” fantasy novel (er, trilogy), which I read first in 6th grade and faithfully re-read twice every year through college, before slowing down to once a year in my mid-twenties, and finally to once every two or three years.  I love this book (um, books.)  Incredible world-building, a truly epic story, and some marvelous characters.  My only complaint is the scarcity of women characters, though Tolkien did at least create two very strong female characters in Galadriel and Eowyn.

The Belgariad (David Eddings)  Another series I’m counting as a unit, because truly, you can’t read any one of these books without the other four.  Eddings makes lavish use of traditional coming-of-age and epic quest fantasy tropes, and his characters are remarkably stereotyped by nationality: Drasnians are all spies, Sendars are practical and down-to-earth, Chereks are burly warriors little prone to thinking, and so on.  What makes it all work are two things.  First, there is Eddings’ dry, even ironic sense of humor, which subtly permeates the books.  And second, beyond the stereotypes (or archetypes), his characters are real, flawed, and likeable people.  Okay, maybe three things:  it’s also a cracking good story.  (That’s two covers but one series up there — the books were re-released in a 2-volume omnibus edition a few years back.)

The Beekeeper’s Apprentice (Laurie R. King)  How can you not love a book which features a teenage girl who is the intellectual equal, apprentice, and finally partner of Sherlock Holmes?  King manages to humanize Holmes without violating Conan Doyle’s portrayal of him.  And Mary Russell is his perfect counterpart.  King also writes with a keen understanding of early 20th-century British life and a believably British linguistic style.  The result is sheer magic.  (I also love the rest of the series, especially O Jerusalem, Justice Hall, and Locked Rooms.  And I’ve reviewed some of the series here.)

Gaudy Night (Dorothy Sayers)  I love the whole series of Lord Peter Wimsey mysteries — well, almost.  There are one or two that I merely like.  But if I have to choose just one, it would be Gaudy Night, because it’s so much more than a mystery: it’s a literary novel, a tribute to the Oxford of Sayers’ youth, even a romance.  It’s brilliantly written, Sayers at her absolute best.  And it has one of my favorite proposals of all time.

Aunt Dimity’s Death (Nancy Atherton)  I’ve mentioned this book on one or two top-ten lists before.  I’ll be honest; it’s not great literature, though it’s well-written and engaging.  I’m not entirely sure why I find it so appealing, but Aunt Dimity’s Deathhas been one of my go-to comfort books for the last 15 years – my literary equivalent of a nice cup of tea.  In part, it may be the wish-fulfillment aspect; my Anglophile’s heart lifts at the idea of a cottage in England.  In part, it’s Lori and Bill and the charming relationship that grows between them.  There’s no murder in this mystery, and even the ghost is charming rather than alarming.  In the end, I think it’s probably the book’s message that endears the book to me – that even when life seems dark and difficult, the warmth of love and friendship will triumph as long as you accept them.

Anne of Green Gables (L. M. Montgomery)  Anne is a kindred spirit, one of the friends of my heart when I was growing up.  I laughed with her, cried with her, and dreamed with her.  The book — and the series — are indelibly part of me. And I still re-read them every few years.

The Secret Garden (Frances Hodgson Burnett)  Another book I read over and over as a child (and still do), this one is forever linked in my mind with Tasha Tudor’s delicate illustrations.  What is it about Mary, Dickon, and Colin that is so compelling?  Or is it the garden, that secret place accessible only to the children, that so captured my imagination?  I only know that when I visited Yorkshire as a child, I was firmly convinced that Misselthwaite Manor was a real place, and was disappointed to discover that I could only visit it in my imagination.

Linnets and Valerians (Elizabeth Goudge)  I’ve reviewed another of Goudge’s children’s books on this blog, the magical The Little White Horse.  I’m also very fond of a number of her works for adults, particularly A City of Bells and Gentian Hill.  But Linnets and Valerians is the first book by Goudge I ever read, and it remains one of my favorite children’s books of all time.

The Protector of the Small quartet (Tamora Pierce)  I’ve already reviewed this series on the blog;  it’s my favorite of all of Pierce’s works.  Kel is an awesome heroine.  I love that she isn’t magically gifted or god-touched; she’s just an ordinary girl with extraordinary tenacity who doesn’t let anything stop her from achieving her dream.  I also admire her sense of justice and her compassion toward others.   The realism in this fantasy series is amazing, from how it feels to learn swordsmanship and jousting (bruising and exhausting) to the gutwrenching fear of agoraphobia.  And despite the often serious issues the series deals with (prejudice, bullying, dangerous and horrifying creatures, the inhumanity of war), Pierce injects a fair bit of humor along the way.
The Blue Sword (Robin McKinley)  Asimov’s Science Fiction Magazine said of this book, “Any book that, at one point or another, reminded me of The Sheikh, Gunga Din, Islandia,and The Lord of the Rings can’t be anything but a true original.”  Yes.  That.  And I love Harry (Hari); she’s another terrific female character.  (I picked this as one of my Top Ten Beach/Vacation Reads last summer.) 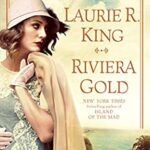 34 Responses to “Top Ten Tuesday: Favorite Books I Read Before I Was a Blogger”